The US recovery will continue against the Delta variant

The Delta variant is on the rise in the United States, and the new daily number of COVID cases is at its highest level since January. The increase in cases has rekindled some caution about the outlook, and we have lowered our growth expectations this year and next since our last monthly release. We now expect the economy to grow at an annualized rate of 6.8% in the third quarter, down from 8.8% previously.

Despite a few downward revisions, the broad outlines of our forecast remain more or less intact, and the revisions are in part due to weaker-than-expected GDP performance in the second quarter. Production has consistently exceeded its pre-pandemic level, although it remains around 2.3% below what it would be in the absence of the pandemic. This “output gap” should continue to narrow over the rest of the year, even with our reduced growth expectations.

Our forecast is based on the assumption that the worst of COVID is behind the United States, but the recent increase in cases is still likely to be a headwind for activity. While each successive wave of COVID has been less economically disruptive, today’s outbreak has raised greater concern due to the much more contagious Delta variant and the potential for voluntary restrictions on activity.

Activity appears to have held steady over the past month, although high-frequency data suggests a plateau in August. It is encouraging to note that hiring has accelerated considerably recently, but the pace remains limited by a serious shortage of manpower. As a result, wages rise and give a more lasting boost to consumer prices, which could potentially undermine the purchasing power of consumers and undermine confidence. We continue to expect personal spending to move into the much larger services category for the remainder of the year as spending on goods recedes after demand has been pulled forward.

As the general outlines of our forecasts remain largely unchanged, our expectations for monetary and fiscal policy remain the same. We continue to believe that a tax package will be passed later this year, even though it is just the scaled-down “basic” infrastructure plan that was passed by the Senate this week. For monetary policy, we expect the Fed to officially announce a cut by its December FOMC meeting and for the actual reduction in purchases to begin in late 2021 or early 2022.

The US recovery will continue against the Delta variant

The Delta variant is on the rise in the United States, and the number of new daily COVID cases is at the highest level since January (see graph) The increase in cases has rekindled some caution about the outlook. Since our last monthly release, we have lowered our expectations for economic growth this year and now expect the level of US production to be around 2% lower by year-end compared to our forecast of last year. a month. We now expect the economy to grow 6.8% in the third quarter and 6.1% in the fourth (up from 8.8% and 8.1% previously).

The general shape of our forecast remains more or less intact, and the revisions are in part due to the weaker-than-expected performance of the economy in the second quarter. US production grew at an annualized rate of 6.5%, and past data has been revised downward slightly. While US production has passed its pre-pandemic peak (Q4-2019), production remains below what it would have been if the pandemic had never occurred and real GDP had grown at its annualized rate 2010-2019 average of 2.3%. While we expect the economy to currently experience its maximum growth rate, we still expect growth well above trend until next year as the economy continues to narrow the created output gap. by the pandemic (see graph). 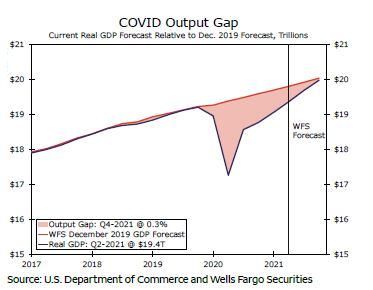 Haryana Donates Coronil, But Has No Basis ...