We have increased our inflation forecast for 2021 for the Personal Consumption Expenditure Price Index to 2.9%, from 2.3% previously. We forecast core inflation of 2.5% in 2021. For 2022-25, our forecast is essentially unchanged; We expect moderate core inflation of 2.3% on average, just above the Federal Reserve’s long-term target of 2%.

The Consumer Price Index jumped 0.8% in April, following a sharp rise of 0.6% in March. Core inflation rose even faster in April, up 0.9%. In fact, the CPI has made up for its losses from the pandemic and is now ahead of its pre-pandemic trend of 1.9% annual growth.

Inflation expectations in bond markets have soared in response to rising inflation. The five-year breakeven inflation rate (the difference in yield between five-year T-bills and five-year inflation-protected T-bills) rose to 2.7% in May, the lowest level high since before the Great Recession.

When we decompose the deviation of the CPI from the trend into various components (based on the average inflation of these components over 2015-19), we see that inflation for new and used vehicles was responsible for most of April’s rise and accounts for most of the positive gap. of the trend in April. This reflects the constraints in the automotive supply chain that have caused vehicle prices to skyrocket. Food price inflation is also well above trend, reflecting supply problems in this sector. The sharp rise in inflation since the end of 2020 is mainly attributable to vehicles as well as a recovery in energy prices. 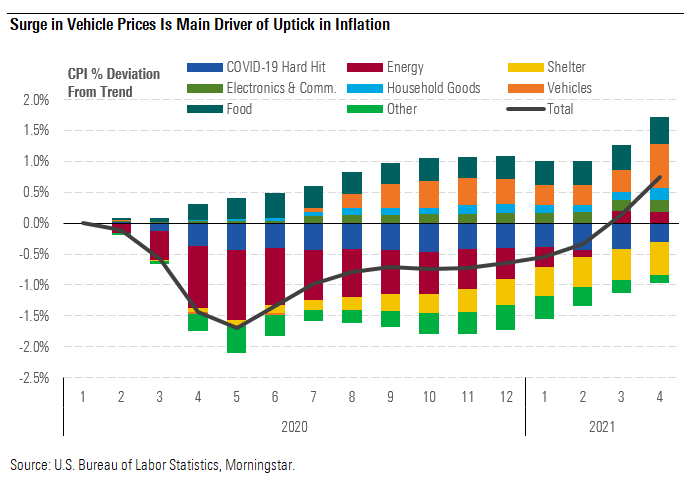 Given that we believe that these pressures on the supply chain should be gradually alleviated, aided by a shift in consumer demand from goods to services, we do not believe that these issues will have a major impact on inflation by 2022 and beyond. Additionally, we believe the recovery in oil prices has fully unfolded, which means energy prices should flatten out from here. However, as current inflation factors eventually subside, new sources of inflation will emerge over the next few years. In particular, we expect that the narrowing of the output gap and tightening labor markets will fuel inflationary pressures. 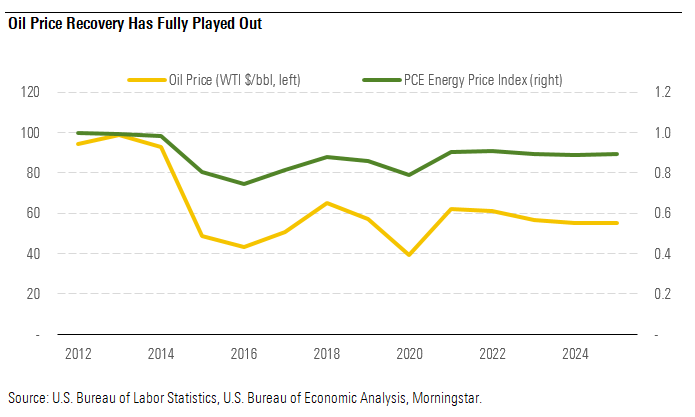 Closing the output gap (when gross domestic product equals its potential) means that the slowing recession in the economy will disappear for the first time since before the Great Recession. Via the traditional Phillips curve relationship, this should mean higher inflation. However, the experience of the past decade has suggested that the Phillips curve may have flattened slightly, which means less sensitivity of inflation to the output gap.

More concretely, we expect very tight labor markets over the next few years to lead to strong wage growth, which should create widespread inflationary pressures. We expect the unemployment rate to drop to an extremely low level of 3% in 2022-24. These very tight labor markets will be necessary to attract once discouraged and marginalized workers into the labor market, thereby pushing workforce participation to its potential. To be clear, this is only a one-time source of inflationary pressure, because once marginal workers are in the workforce, their presence should be persistent. But it will be a protracted process over the next few years.

Additionally, we believe inflation risks are weighted up, given the Fed’s willingness to let inflation exceed its long-term 2% target for some time to compensate for the fact that it was. below its 2% target for much of the 2010s.

In total, this means that we forecast PCE inflation (total and base) of around 2.3% on average over the next five years. Since the CPI is typically around 30 basis points higher than the CPI, this implies CPI inflation of 2.6%. That’s pretty close to the five-year break-even rate of 2.7% implied by inflation-protected Treasury securities, which use the CPI. 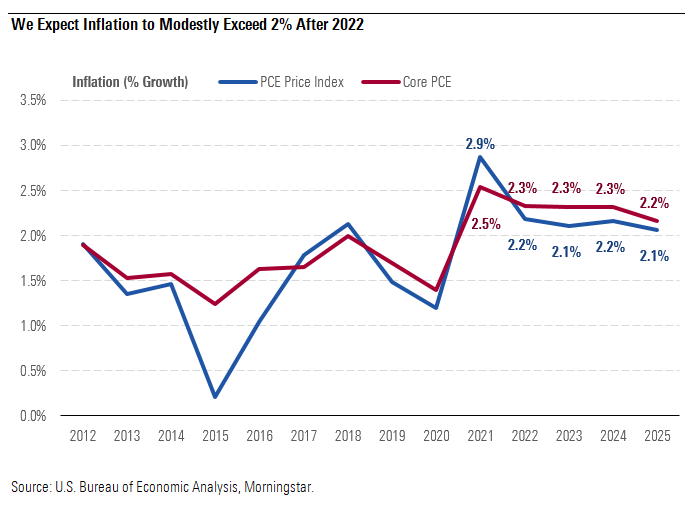