Guide the waves by cutting their edges

A new waveguide design uses a series of openings, or slots, to keep the waves confined to a narrow path.

Waves passing through a slit will spread out normally. But new experiments with plasmon waves – combinations of oscillations of light and electrons – and with water waves show that a slit sequence can confine waves along a narrow path. [1]. The slits block the outer edges of the waves, while the unblocked portions focus towards the central axis of the waveguide due to interference effects. The simple slit-based design could be useful in situations where traditional waveguides are difficult to fabricate, such as in experiments with terahertz (far infrared) light waves.

Waveguides are available in a variety of designs. A common form is a hollow metal pipe that can transmit radio waves or microwaves. At shorter wavelengths, a more efficient approach is to use a fiber of dielectric material with a refractive index such that the waves reflect at the outer shell of the fiber rather than escape. . In some cases, however, it is difficult to find a dielectric material with the necessary refractive index.

Graduate student Dror Weisman of Tel Aviv University in Israel and his colleagues developed a slit-based waveguide. “We don’t need any special material with a specific refractive index,” Weisman explains. “The only thing we need is some material that blocks the waves.” The idea is based on what is called diffractive focusing, in which waves passing through a slit form a narrow beam before they diverge. This focusing is difficult to observe because it occurs near the slit: for a slit having a width of about five wavelengths, the focusing occurs at a point about ten wavelengths away from the slit. .

In a previous study on diffractive focusing, Weisman and his colleagues observed waves propagating through two slits in series, with the second slit placed near the focal position of the first. [2]. They noticed that when light passed through both slits, the diffraction pattern was similar to the diffraction pattern for a slit, suggesting that the process could be repeated with a third slit, a fourth slit, and so on. The team predicted that with each slot focusing its output into the next slot, the series would act as a waveguide.

The researchers have now verified this prediction with two experiments. The first involved plasmon waves, which are electromagnetic waves propagating along a metal surface and coupled to electrons in the metal. To make a slit plasmon waveguide on a silver plate, the team made pairs of thin walls in silver, with each pair separated by a gap of 14 micrometers. They tested waveguides with 2, 3 or 4 slits, with 40 micrometers between successive slits.

Using a laser, the team generated plasmon beams with a wavelength of about 1 micrometer and probed the output of each waveguide with a near-field scanning optical microscope. They estimated that each slit caused a loss of about 10% of the energy of the plasmon beam due to the clipping of the wave edges by the walls. In terms of loss per distance traveled, the slit waveguide was comparable to conventional plasmon waveguides.

In a second experiment, the team tested the slit waveguide with water waves generated in a reservoir. Rather than passing the waves through a set of barriers (space slits), the researchers ran their wave generator repeatedly for short time windows (time slits). Each wave burst “concentrated” into a narrow wave packet before spreading out in space and time. The team measured the shape of the wave packet near the focal point and fed the amplitude and phase data back into the wave generator to produce the next burst, removing data falling outside the time window. This iterative procedure kept the wave packet confined.

The slit waveguide is a general solution that should be applicable to all waveforms, says Weisman. The technique could be practical for terahertz light, for which existing waveguides often require complicated composite structures to fabricate. A slit-based terahertz waveguide would be easier to fabricate, which could be an advantage for long waveguides, Weisman says. Another advantage is that the sizes and positions of the slits are adjustable. For example, the team showed that reducing the width of the slits allowed the waveguide to taper a beam, while moving the positions of the slits could change the direction of the beam.

“This represents a new element in the photonic device design toolbox,” says optics expert John Dudley of the University of Franche-Comté in France. “This is one of those wonderful items that takes a seemingly well-known, basic physics concept and applies it to develop new functionality,” Dudley said.

Michael Schirber is correspondent editor for Physics based in Lyon, France. 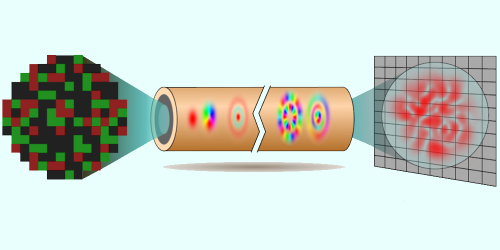